A Call To Action by Eleanor Savage

The following issues of REFRAME will be featuring works that were presented at the ArtChangeUS Launch in New York City in anticipation to the ArtChangeUS: Bay Area REMAP event at YBCA on April 15-16, 2016. First in this series is Eleanor Savage’s “A Call To Action” that was presented in the Roundtable discussion Shifting The Paradigm on Race. 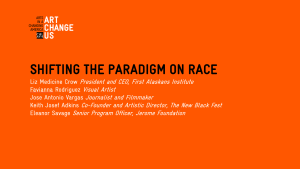 A Call To Action 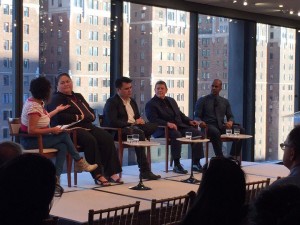 When Roberta Uno asked me to be part of an ArtChangeUS panel responding to the question of how we shift the paradigm from diversity, inclusion, and representation to equity, desegregation, and transformation, I struggled with how to answer. I am an artist, racial and social justice activist, and I work for Jerome Foundation, an independent foundation that funds the arts. I don’t honestly feel that the arts and culture community as a whole is operating from the standard of diversity or equity. The paradigm I experience daily is still racism, segregation, and exclusion of people of color.

As evidence of this, I collected some typical comments that I and other program officers in the funding world hear in response to efforts to address diversity or equity:

In looking at the messages inherent in these comments, both the racism and the resistance to moving away from racist practice is loud and clear: 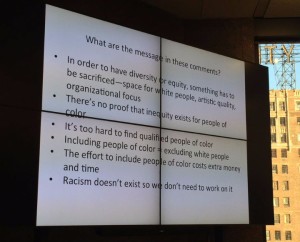 I challenge us to stop acting from places of fear, passivity, apathy, complacency, discomfort, and resistance to, denial of, and antagonism toward the reality of racism. These kinds of behaviors are as much a part of what keeps racist systems in place as overt violence. I encourage us to keep our own list of the daily experiences of racism.

We need to acknowledge racism exists and we need to take a stand against it. We have to learn how to acknowledge it, interrupt it, challenge it, be in conversation about it, act against it, and change the systems that perpetuate it. For white people who define as anti-racist, we can’t position ourselves as separate from covertly and overtly racist people.  We have to be responsible and accountable for shifting the paradigm of racism. We have to create space for anti-racist learning that is not punitive. This work has to come from a place of love and compassion.

For the last couple of years, I have been asking people, “Where do you see racial equity happening?” There’s usually a long silence and few answers in response.  We are still so rooted in systemic racism that we can’t even imagine what a different paradigm might look like. We need a vision for what we’re moving toward, not just what we’re working against.  Artists and the arts have much to offer in helping create this vision of equity—what it looks like, feels like, and sounds like.

I offer these suggestions in answer to the question of “How do we move from this racist paradigm.” 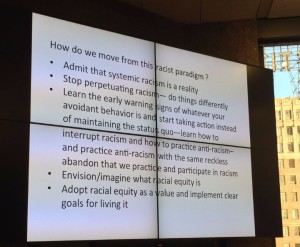 Eleanor Savage is a senior program officer of the Jerome Foundation and member of the Grantmakers in the Arts Racial Equity Forum.