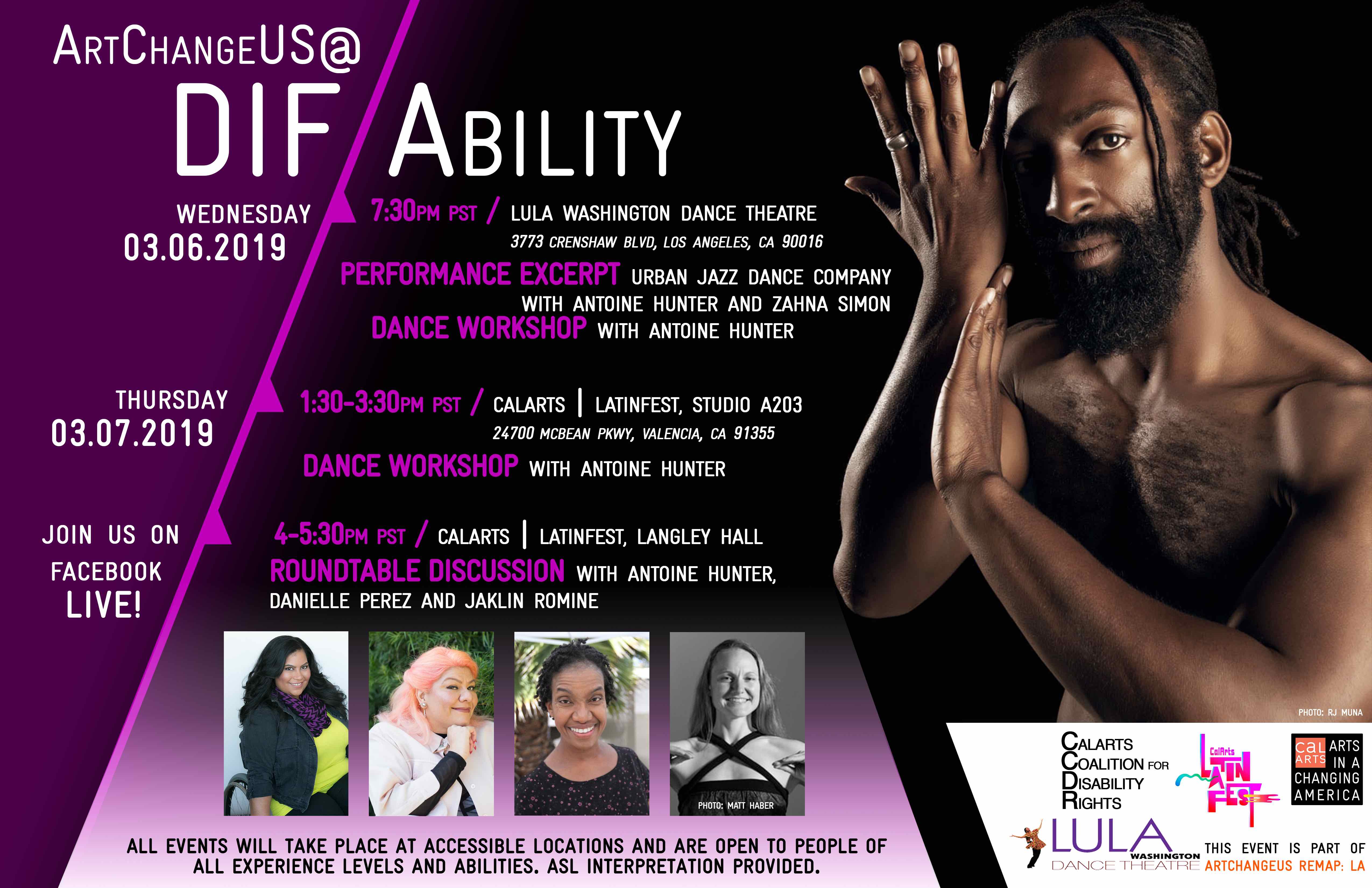 How can we center creativity as a pivot point against ableism?
How might issues of accessibility fuel artistic production?
In what ways are artists of color living with a disability uniquely catalyzing social change?

Join us March 6 and 7 for ArtChangeUS@DIF/Ability, a series of dance workshops and roundtable discussion with artists who navigate the art world as disabled creators. On March 6 at Lula Washington Dance Theatre in Los Angeles, DIF/Ability will feature an Urban Jazz Dance Company performance excerpt by award-winning Deaf producer/choreographer/dancer/Deaf advocate Antoine Hunter and professional dancer/Deaf advocate/Deaf interpreter Zahna Simon followed by a dance workshop with Hunter. DIF/Ability will continue March 7 at CalArts with a dance workshop with Hunter followed by a series of artist presentations and roundtable on art, accessibility, and equity with Hunter, comedian Danielle Perez and visual artist Jaklin Romine moderated by actor Diana Elizabeth Jordan. These artists will share processes in their practices and experiences as people holding intersectional marginal identities. They will expand on the ways their identities influence their art and engagement with their respective fields.

All events take place at accessible locations and are open to people of all experience levels and ability. ASL interpretation provided.

View the Live Stream Archive below!

This event was planned and organized by the ArtChangeUS 2018-19 Fellows and staff, in collaboration with Lula Washington Dance Theatre, CalArts Coalition for Disability Rights, CalArts School of Dance, and CalArts LatinFest. ArtChangeUS@DIF/Ability is part of ArtChangeUS REMAP: LA.

ArtChangeUS is committed to creating an inclusive environment. This includes providing accommodations to make our event more accessible. If you need accommodations to attend DIF/Ability or our other programs, please email your needs to genevievefowler@alum.calarts.edu

Antoine Hunter, UJDC’s founder and Artistic Director,  is an award-winning African-American Deaf choreographer, dancer, dance instructor, and Deaf advocate. Hunter has performed with Savage Jazz Dance Company, Nuba Dance Theater, Alayo Dance Company, Robert Moses’ KIN,  Sins Invalid, Amara Tabor-Smith, Kim Epifano, Push Dance Company, Fly Away Productions, and Zaccho Dance Theatre. Hunter is a faculty member at East Bay Shawl Anderson and ODC. Awards include the inaugural Jeanette Lomujo Bremond Award for Humanity in the Arts by Hālau Ku Ua Tuahine (2018), the Isadora Duncan Award for BAIDDF (2018), King of Carnaval SF (2017), the Bay Area People’s Dancers Choice Award (2011), Margret Jenkin’s CHIME (2011), VRS Award (2009, Video Relay Services), and Bay Area Star Award (2000). He has appeared in Dance Spirit Magazine, Dance Magazine, and Deaf Advocate Magazine, and the former president of the Bay Area Black Deaf Advocate and Director at Large for the Northern California chapter of the California Association of the Deaf. Hunter has performed at John F Kennedy Center of Performing Arts with VSA (International Organization on Arts and Disability) and is an active supporter of DeafHope, an organization whose mission is to end domestic and sexual violence in Deaf communities through empowerment, education, and services. He teaches dance and ASL in both hearing and Deaf communities and has been recently featured on KQED and Great Big Story as a Deaf dance ambassador. He travels around the world teaching and lecturing at Harvard University, Duke University, Woodruff Arts Educator Conference, Grantmakers in the Arts Conference, National Assembly of State Arts Conference and internationally in Sao Paulo, Brazil, Medellin, Colombia and Newcastle, United Kingdom. He was also featured in a Wells Fargo commercial representing Deaf consumers.

Diana Elizabeth Jordan enjoys wearing many artistic hats. She is an award winning actor, a producer, director, a speaker, artist educator and artivist. Diana has worked in theater, film, and television and was most recently seen on CBS’s hit show S.W.A.T. Diana was the first actress with a disability (cerebral palsy) to graduate with an MFA in Acting from California State University Long Beach and is featured in Liliana Moldovan’s Eroii Imposibilului, a book featuring multi-disciplined artists with disabilities. Diana launched her EduTainment Production Company The Rainbow Butterfly Café in 2015, with a mission to eradicate disability stigmas, othering and limiting beliefs through performance and the expressive arts. www.dianaelizabethjordan.com
www.rainbowbutterflycafe.com

Danielle Perez is a stand-up comedian, writer, and actress best known as the woman in a wheelchair, with no feet, who won a treadmill on The Price Is Right. She appeared as a guest on Jimmy Kimmel Live for her hilarious reaction to winning the awkward prize. Before viral video fame, Danielle rolled onto the Los Angeles comedy scene and quickly established herself as a unique comedic voice with her bubbly stage presence and dark wit. A 2018 StandUp NBC Semifinalist, Danielle has opened for Maria Bamford, Guy Branum, and Laurie Kilmartin. She has performed at comedy clubs and festivals across the country including Laughing Skull Comedy Festival, SF Sketchfest, Brooklyn Comedy Festival, and All Jane Comedy Festival. Funny, feminist, and fierce, this bold Latina isn’t afraid to get personal. Danielle has been profiled by CNN, Great Big Story, WhoHaha, and GabiFresh. She was the face of Refinery29’s 2016 #TakeBackTheBeach campaign and in 2018 highlighted as one of the 13 Powerful Women Who Are Making LA a Better Place by Los Angeles Magazine. Not just a performer, Danielle is a disability rights advocate who has spoken on the importance of diversity in comedy at the 2018 NALIP Media Summit and the USC School Of Comedy. She is an advisor on disability at Jill Soloway’s 5050by2020, an intersectional arm of the Time’s Up movement. A founding member of Thigh Gap Comedy, Danielle produces live comedy shows with fellow bad bitches Madison Shepard and Danielle Radford. Together they host GENTRIFICATION, a popular, monthly, diversity showcase at Avenue 50 Studio, in her hometown neighborhood of Highland Park. Danielle owns multiple bodycon sequin dresses in a plus size and believes brunch is a right, not a privilege.

Jaklin Romine was born in Burbank, California, and currently lives in East Los Angeles. She studied Studio Arts at Cal State LA, where she was selected to be part of the Luckman Project. She then showed in galleries around Los Angeles, such as Gallery 825 and Los Angeles Municipal before completing her Masters of Fine Arts at CalArts. Since then she has shown at Night Gallery, New Women Space in Brooklyn, The Pomona Art Walk, Avenue 50 Studios, and participated in Benefit Art shows for the National Day of Racial Healing put on by Array, and Sin Fronteras benefit for migrants at the border, put on by Eastside Cafe. Romine currently has work in a group show, Continuant, at Noysky Projects. She has recently participated in panel discussions on arts, activism, and disability at The Main Museum in downtown Los Angeles and the Torrance Museum. Romine continues to make new photography installation work that ambiguates the idea of the image, while turning prints into three-dimensional sculptural objects. This forms a new language between the image, object-hood, collage, and architecture it creates and inhabits as an installation. Her performance work explores the everyday experience of a latinx, disabled, female, queer, poc, body whose politicized identity then explores socially and physically constructed ideals of ableism within the Los Angeles art scene. This is an unrepresented topic and experience that needs attention due to the ever growing number of artist-run galleries that choose to be in inaccessible spaces.

A San Francisco native and Deaf from birth, Ms Zahna Simon is honored Changemaker of the year 2018 for San Francisco Live Oak School where she is former alumni. She is a professional dancer, chemist, avid health nutritionist, researcher, Deaf advocate and Deaf interpreter.  She is a former student at San Francisco School of the Arts (SOTA) where she trained with Elvia Marta in Modern, Jazz, African, Ballet, Hip Hop and Choreography as well as participating in Alonzo King’s LINES Pre-Professional Summer Programs. Upon graduating from SOTA in 2003, Ms Simon attended UCI double majoring in Chemistry and Dance. At UCI she trained and performed various dance styles, working with fellow peers, graduate students and distinguished faculty such as Lisa Naugle, David Allan and Donald McKayle.  She is also a former chemist by day at Vertex Pharmaceuticals and dancer by night at various Dance companies in San Diego including being featured in KPBS TV and Radio special “Deaf Dancer Performs in Trolley Dances.” Ms Zahna has relocated back to the Bay Area and worked her way diligently and passionately up to being the Assistant Director for both Urban Jazz Dance Company and the Bay Area International Deaf Dance Festival under Antoine Hunter, Founder and Director and a full time office manager/case manager at a small Fiduciary Office in San Francisco. She has also performed with Kim Epifano, San Francisco Trolley Dances, Alameda Island City Waterways and Man Dance Company in the Bay Area.