An Inside Look at Shelter by Marissa Chibas

In the winter of 2014 I read an article that set the course for a creative collaboration that would last over 2 and a half years. That collaboration would prove to change the lives of those of us at CalArts that were involved in the play and workshops that emerged. Our project had an impact, not just in our community of LA, but nationally, as well as in Mexico.

The subject of the article I read was on “unaccompanied minors” and appeared in a Sunday LA Times article written by journalist Sonia Nazario. The article focused on the terrible violence children traveling by themselves were fleeing and how treacherous their journey to the United States is. In the article two women were quoted; Susan Terrio of Georgetown University who was in the process of writing her extraordinary book Whose Child Am I?, and Elizabeth Kennedy, a PH.D. candidate and Fulbright scholar from UC San Diego who was working with children who had been deported back to El Salvador. I wrote to them that Sunday and heard from them both a few hours later. It became clear that day that I needed to reach out to my colleagues at the CalArts Center for New Performance and do a play that focused on the plight of these children. Both Susan and Elizabeth became advisors on this project. For the next year I researched the subject, interviewed volunteers, visited a shelter where I witnessed first hand the kids acclimating to their new lives, and interviewed several recent arrivals at a local downtown LA high school, The School of History and Dramatic Art (SoHDA), where the CalArts Community Arts Partnership has been holding writing workshops for over 5 years.

Mexico City based director Martin Acosta came on to the project in the spring of 2015 and we chose a group of actors, designers, managers, and producers to develop material together during a three week workshop. The outcome of that workshop was the basic outline for our show from which I wrote the script. I can honestly say I have never been more nervous for anything than the night the kids I interviewed were in the audience to see the presentation of the first workshop. I found myself leaning over to watch them watch the show. “Do they like it?, Do they recognize their stories? Have I done their experience justice?” Luckily they were elated and very moved by the piece. Afterwards one of the young women said “I feel represented”. That moment was the most fulfilling experience of my artistic life. I saw the power of having her story told and witnessed publicly by others, a story that is not often shared and a voice that is severely under represented. I could see a shift in these young people from a demeanor that carried shame to one of pride. Their bodies changed and they realized that their stories are important and matter.

The play was first performed at CARECEN LA where we conducted a series of youth empowerment workshops that were also done at SoHDA. The recent arrivals I interviewed participated in the various stages of the making of the play as well as one of the empowerment workshops, and were present at the opening night of our premiere at a free outdoor Performance in Lincoln Park. The show played to sold out audiences for two weeks and the response from the community was overwhelmingly positive. I loved seeing people walking along the lake by the park or riding their bikes and just stop and listen to the play then choose to stay. I saw little girls as young as 6 sitting with their families on blankets and riveted to the performances. Afterwards I had many people with similar stories approach me. One young man told me he understood his mother, who had emigrated from El Salvador 20 years earlier, through seeing the play. Another young woman who had traveled from Belize told me that it wasn’t until the show began that she realized how frightened she had been when she had made her crossing alone at the age of 19 with her infant. Her emotions overtook her and she explained that she had never allowed herself the space to feel the terror she had experienced and what a relief it was to let that go.

There were many stories like this as well as others who who had hardly heard of the subject and had never been to that part of Los Angeles. Our panels and brought people together and helped forge partnerships with people working with migrant communities to share ideas and strategies. My own collaboration with Susan Terrio has evolved and we plan to work together on other projects in the future.

Our director, inspired by Shelter, decided to create a similar play in Mexico, this time focused on the women of Las Patronas near the border of the U.S. and Mexico who, for over twenty years have dedicated themselves daily to collecting food and water and throwing them to the migrants riding on top of the trains that pass by their village. And so the power of this collaboration has extended to another country. Shelter is currently being published by NoPassport press and is getting a great deal of interest by schools, theaters, and community centers across the country. It is our deepest hope that the sharing of these stories carries us to creating spaces for conversation on this subject and policy changes that have impact on the communities suffering over this tragedy. Too many lives are in peril to turn our gaze away. I have never before felt more urgency and desire to make work like Shelter. It has opened a path for me that I will continue to follow.

Below are some reflections on being involved with Shelter from several current CalArts students and recent alum. 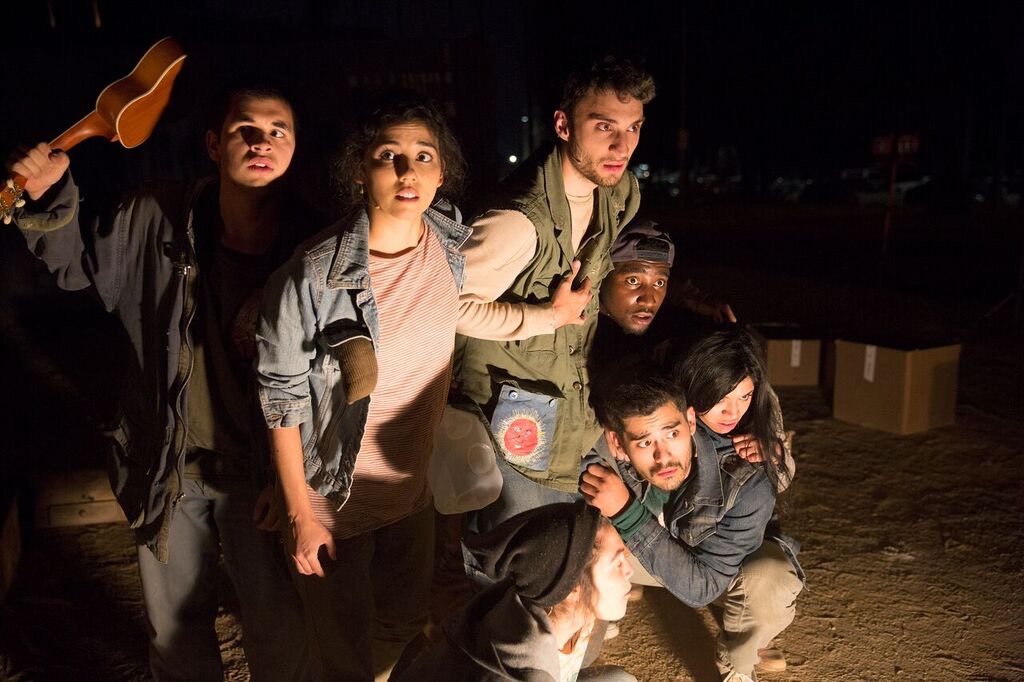 Shelter to me is a way of expressing the strength, courage, and resilience necessary to make the trip to America. Meeting all the people who were personally affected by the stories we told help me to grasp how important this story is. This process has shown me that referring to these immigrants as statistics and numbers do not do justice to their struggle. It has made me appreciate the life of comfort that I’ve been granted. It has instilled a compassion in my heart for those who hope to one day make a better life for themselves by coming to America.

It was meaningful to have direct contact with the teenagers who did the journey, with the organizations (CARECEN LA and Plaza de la Raza) that are deeply involved in migration issues, and with Teatro Jornalero… it didn’t hit me how ‘huge’ it was to be performing at the Kennedy Center, until I was sitting in the audience seat and the show started. Performing in the capital, in front of people who might have the power to actually do something with the policies, in the heat of all that is currently happening, what was talked about in the news, AND, the panel discussion was so impactful! I felt like our work for the past 2 years was validated, we are doing something powerful and good for a lot of people – this feeling I want to stick with me for as long as possible, to remember this and carry it with me to my future projects. 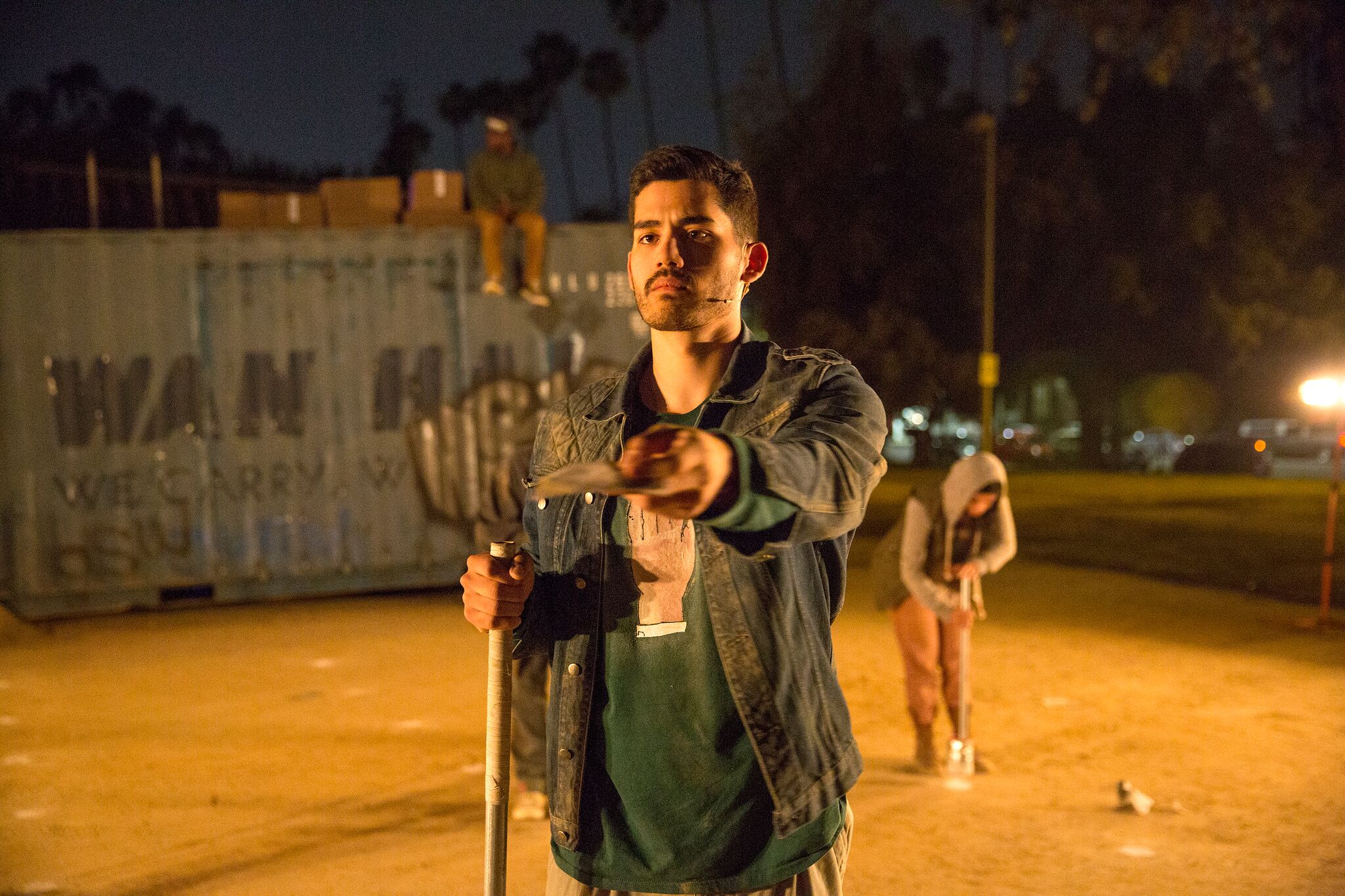 A moment that struck me deeply was during our performance at the Kennedy Center in Washington D.C. when I was speaking to the audience the words of Archbishop Romero’s letter to President Carter. I realized as I was looking out into the theater that I was very likely standing in front of people who had the power and ability to work towards tangible change on this subject. I was addressing people who make decisions in the city where decisions are made, so when I looked straight into their eyes and said, “I hope that your religious sentiments and your feelings for the defense of human rights will move you to accept my petition, thus avoiding greater bloodshed in this suffering country ” I felt myself visited by a surge of mingled anger, sorrow, and hope. I have never had an experience before where I spoke as a character and as an actress at the same time. In this case, I was Alicia speaking for Oscar Romero speaking on behalf of the Salvadoran people and, myself- a Latin American woman… It was a unique lesson about the power of theater to cut a clear channel of truth between bodies normally separated by history, position, and fiction.

SHELTER is not a headline, statistic, or online video to be liked or disliked, but it is a live event to be experienced, a journey to be witnessed and shared- one that communicates the necessities and humanitarian implications of the current refugee crisis in the U.S. It goes even deeper to the person-to-person, individual level, recounting the voices of children who make the journey and their stories. Voices most often glazed over by the immensity of the whole situation. Performing at both Georgetown, and the Kennedy Center were delightful experiences…as an artist I felt welcomed, and valued. The SHELTER team also bonded and we enjoyed the cultural fruits of such a historically rich city.

On June 23rd, the day after our last show, I visited the Supreme Court for the first time. There was a crowd of protesters and reporters outside, and as I asked around I slowly learned that the commotion was due to the deadlock ruling which blocked Obama’s proposal to provide work and an end to deportation for undocumented immigrants. For the first time in my life, I felt that a piece of art I was involved in was essential to the political news I saw happening in front of me. I was burning to share Shelter with press, demonstrators and politicians alike because I knew it would mean something. I wanted to jump onto the court steps and shout, “Watch this!” 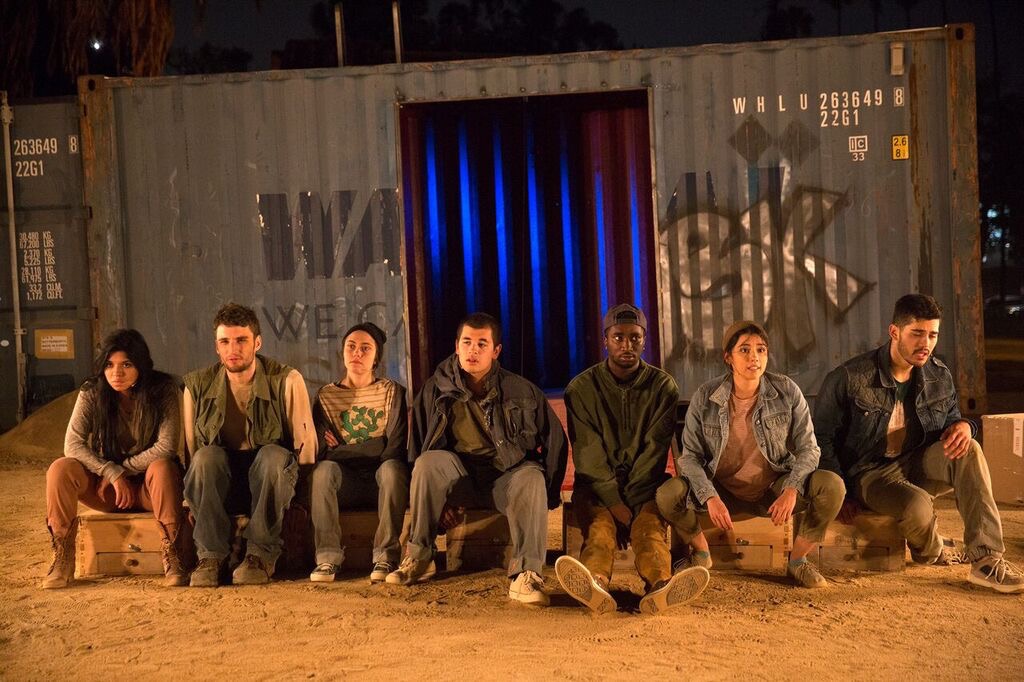 Marissa Chibas is a writer, performer and is on the Theater School faculty at CalArts where she heads Duende CalArts.

More information on Shelter can be found at  http://centerfornewperformance.org/project/shelter/