All Organizing is Science Fiction by Adrienne Maree-Brown

This week’s edition of REFRAME features Adrienne Maree-Brown who, in responding to Jeff Chang’s Call on the changing demographics and its effects on America at the ArtChangeUS Launch in NYC, embraces a future that is shaped by the imagination of science fiction and the courage of social justice. 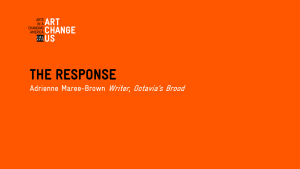 all organizing is science fiction.

we are bending the future, together, into something we have never experienced. a world where everyone experiences abundance, access, pleasure, human rights, dignity, freedom, transformative justice, peace. we long for this, we believe it is possible.

organizers tend to take ourselves so seriously. i was in a sort of closet for a long time as a sci fi reader, because i was sensing strategy and guidance in the pages of fiction, in the words of black sci fi writers like octavia butler, samuel delany, jewelle gomez, in the anthology dark matter. i was reading feminism and decentralization in ursula le guin, network and chaos theory in william gibson.

when i peeked out a bit, i began to share my suspicion that the realm of science and speculative fiction could be a great place to intentionally practice the futures we long for, and that there were writers doing that, that butler was a leader amongst them – there were so many others quietly thinking the same thing!

one of those thinkers was walidah imarisha, who was forwarding something she called visionary fiction, which i am deeply inspired by – the idea is that all of our writing is either advancing or regressing justice. there’s not a neutral ground for our art. so we can perpetuate the tropes we are used to – single white macho man (often matt damon) magically saves the planet by having all the skills and strength and smarts, the masses (often brown) await salvation. in visionary fiction, we center marginalized peoples, bottom-up, collective change, aiming neither for dystopia nor utopia, but that harder, more realistic place in the middle. we have noticed around us that utopia and dystopia co-exist.

we created an anthology together, octavia’s brood: science fiction from social movements. to be accurate, it is visionary fiction – 20 stories and 2 essays. we asked people actively working to change the world to tell us stories from the horizons they could see. we believe that everyone has these universes inside of them, but not everyone feels they have permission to dream, to create the future. so we live inside the dreams and imaginings of those who have privilege, who feel empowered to own the future. people who imagine mike brown is dangerous, who imagine that walls will make them safe from climate change.

we have been touring the book, doing workshops to get people writing science fiction together, using sci fi to imagine creative direct actions. we want visionary fiction to be a transformative process communities can use to flex their collective imagination muscle. 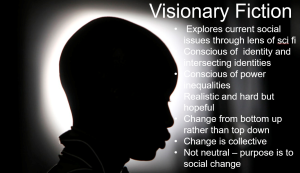 i have also been training and developing theory around the emergent strategies of octavia butler, learning emergence science and working to connect the transformative processes of the natural world to the ways we create change within and through our social justice movements. among the places where i am examining this in practice is a project called the detroit narrative agency, cultivating community moving image projects that reclaim the narratives of detroit.

it is exciting time to sit at the intersection of narrative, science and art. it is an exciting to be a