The King of Transit (C.Gaiter)

An artist friend once gave me this simple and perfect advice about pursuing my own creative work, “Do the work that only you can do.” It has stuck with me ever since. With so many disciplines and media available to artists it can be difficult to find that elusive thing that is what only you can do. I think art making always falls somewhere on a continuum between deliberate strategy and compulsion. All artists are drawn to particular kinds of creative activity—the thing that provides a jolt of adrenaline when the work is turning out as it should. Not necessarily as we intended, but as it should be.

I think the quality of compulsiveness is one of the things that makes “outsider art” compelling. The drive to spend time creating things that live outside of traditional art worlds, criticism and commerce forces artists to constantly defend themselves and justify what they are doing—internally and to others. Geraldo Gonzalez, the self-proclaimed “King of Transit” in the Delaware Valley, (a Mid-Atlantic region that includes Philadelphia, Wilmington, Delaware, and Camden, New Jersey) explains his work simply by stating that he loves drawing buses and commuter trains. He loves public transportation. Selected works from his huge cache of drawings hang in regional transit administrative offices. 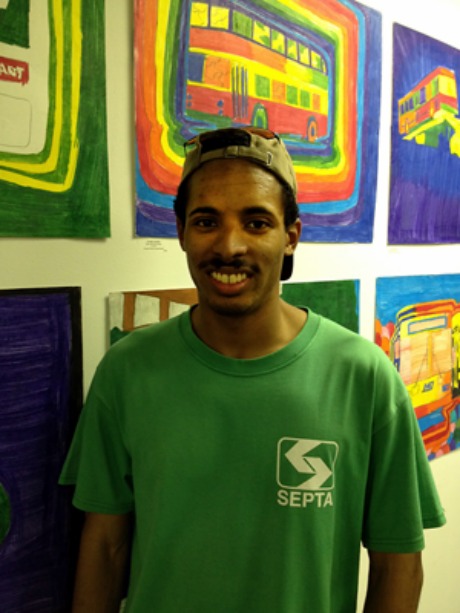 At 23 years old, Gonzalez’s only formal art training was in high school, making him technically an “outsider artist”—one who operates outside of the established world of art degrees and traditional galleries. He is self-taught and follows his own passion and intuition in making his work.  Gonzalez explains, “I started drawing buses at 15, in the summer of 2004. I got to know the routes and the area pretty well. I also met the drivers. I took pictures, printed them out and copied from them. In 2007 I started using a digital camera.”

Gonzalez is not only prolific in making his Crayola-bright animated drawings, but he is also proficient in putting them out into the world through social media. He has a blog, featuring tweets announcing new images or videos as he posts them. On YouTube his channel, “The Delaware Art Transit Program” shows videos he has edited of his process as well as finished pieces—all set to music. When I interviewed him he brought his camera and had a video online within a few days. The King of Transit’s work is also documented on Flickr and Facebook. Local parks, buildings, and city environments are subjects of other drawings, but buses are his passion. To say he is obsessed with them would not be an overstatement.

The regional transit administrators see Gonzalez and his work as promoting public transportation’s environmental advantages. Some pieces are literal advertisements, including text. In the less literal works city buses and trains are transformed from unremarkable elements of urban landscapes to objects of beauty and devotion. In some of Gonzalez’s drawings, the buses seem magical—as if they are going to take off and fly to an imaginary utopia. He transforms them with color and pencil strokes into glowing traveling machines that make people’s lives possible.

A few days a week, Gonzalez works at a doctor’s office doing digital filing, which explains his technical proficiency with computers. He is also a part time student at Delaware Technical Community College, studying business. He spends the rest of his time at downtown Wilmington’s Creative Vision Factory making drawings.

Gonzalez encountered Michael Kalmbach, the founder, and the Creative Vision Factory (CVF) in February of 2012. On its web site, CVF is described as fostering “the creative potential of individuals with behavioral health disorders in a studio art environment that cultivates integration with the local art community through a program of exhibitions, workshops, and communal workspace.” 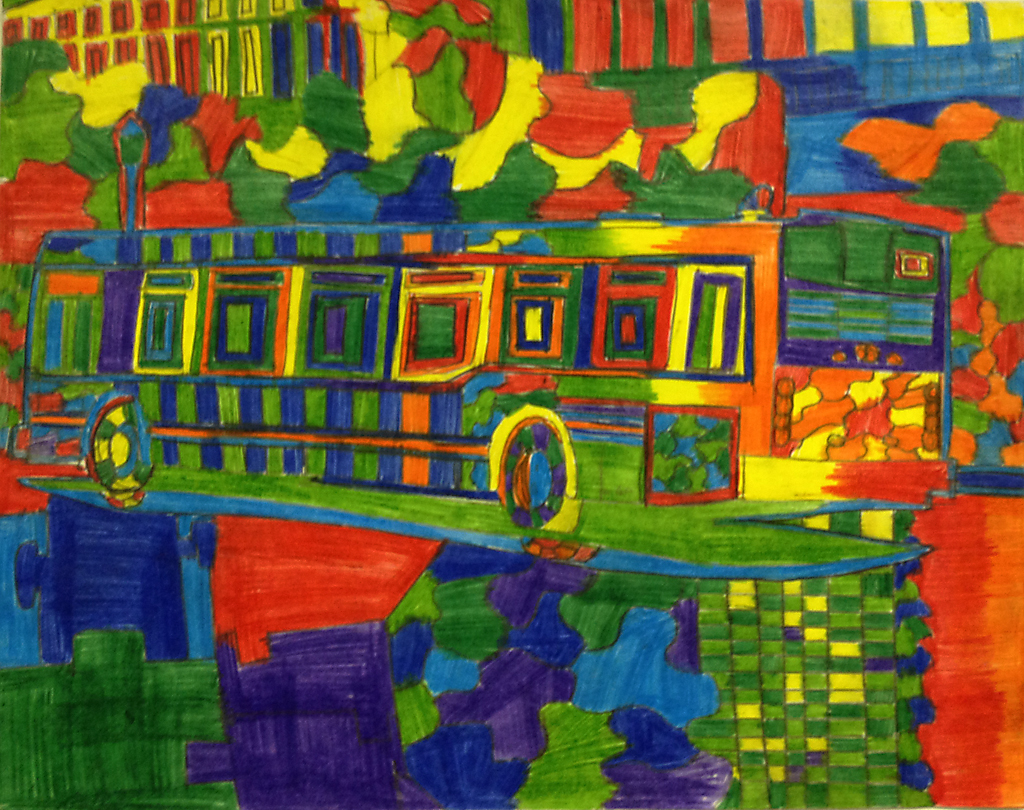 Geraldo Gonzalez technically has a disability that makes him able to be part of the state-funded Creative Vision Factory. The mission of CVF is to encourage participants to use art in a way that is most useful to them. To some people, it is therapeutic, but not professional. One young woman who uses the studio there, a recovering substance abuser, had never done art in a serious way before. She comes to CVF to stay away from her old life, keep busy, talk to people and discover her creative self. Others have clear cognitive or physical disabilities that make it difficult for them to find jobs.

Geraldo and another artist Knicoma Frederick are the most accomplished artists currently at CVF. As director Michael Kalmbach said, “they set the tone for everyone else in terms of discipline and taking their work seriously.” Geraldo Gonzalez and The Creative Vision Factory are a perfect match. Gonzalez would do his work anywhere, since he is compelled to do it, but he finds the atmosphere there supporting and helpful. He is an impor